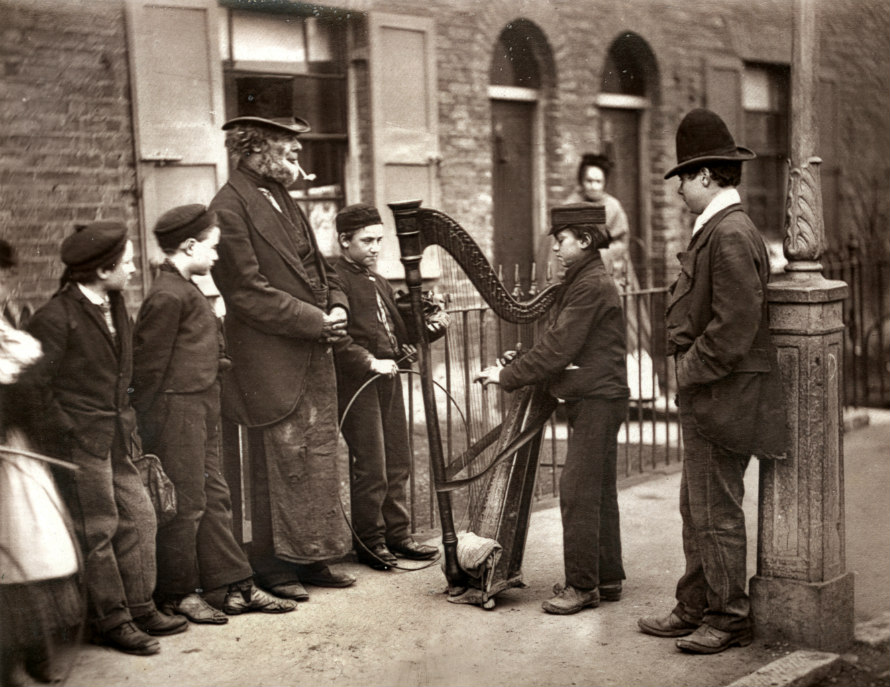 An Italian child playing a harp to a small crowd (from Street Life in London, 1877)

During the period of Charles Booth's survey, London was the centre of an enormous empire that spanned the globe. The police notebooks provide us with a glimpse of some of the different communities from different places who settled and lived in London at the time, and how they were perceived by the authorities.

An Italian colony. Hot potato cans and chestnut ovens, ice cream barrows taken off wheels and hanging against walls of stables; padrone here has over boys of 17 or 18 who live here and work for him.

Jewish communities received particular interest from Booth and his survey team. During the late nineteenth century, London was home to a new and large scale migrant Jewish population, which had arrived from Eastern Europe, fleeing persecution and seeking new lives. As a point of comparison, Jewish migrants in London were second only to Irish settlers in number.

While London at the time was also experiencing a good deal of expansion and population growth it is also worth remembering that during this part of the Victorian era, for the wider UK, it was emigration that was firmly in the ascendancy. Net emigration figures for the years just preceding Booth's survey amounted to close to 1.5 million people.

Emigration to the empire was a popular move for many individuals who could find new lives supporting Britain's colonial mission. However, the most popular destination by far was the United States of America.

An interesting quirk of the time was that the number of single women exceeded that of men, which was considered something of a crisis. An article in Macmillan's Magazine encapsulated the concern: "in a Kingdom in which there are a million more women than men, a woman, though she may be well born and well bred, and have an ancestry which dates from the Conquest, cannot hope to be supported by her male relatives" (Macmillan's Magazine, vol. 45 (1881), p. 312).

The fear that unmarried women could not have fulfilling lives without men to look after them provides a clear perspective on gender politics at the time. In response, various organisations were established that encouraged and supported women to travel abroad and help with efforts in the empire. Many women embraced the opportunities offered, keen to take the step of exploring the wider world themselves. Much of the organisational work was also carried out by societies lead and run by women. The earliest of these was the Female Middle Class Emigration Society which was actually based in Portugal Street, on the current site of LSE Library.

Rapid territorial expansion during the second half of Victoria's reign was a key marker of Britain's position in the world. The scientific and technological advancements that had transformed an agricultural economy into an industrial one also powered the engine of colonial growth. As the empire broadened, the collection and analysis of data became key to the acquisition and consolidation of power. Huge amounts of information, whether about legal systems, marriage customs or botany, underpinned British imperial efforts. In many ways the police notebooks can be seen in a similar vein, with Booth's investigators using them to gather, classify and categorise their observations. They also reflect the prejudices which abounded at the time.

Charles Darwin's On the Origin of Species (1859) predominantly based theories of transmutation and evolution on his observations of plants and animals. However many in his wake took these theories and used them as a basis for classifying human beings. Social Darwinism decreed that natural selection was the key driver in the economic and social position of people, both individually and collectively. The theory also legitimised the hierarchical classification of cultures and races. For Inspector Carter, quoted in the police notebooks, Irish men "are not human they are wild beasts". This remark collectively dehumanises a community, and is one of many examples in the notebooks of descriptions that extrapolate individual characteristics and use these as the basis to define entire groups of people:

About half the population in his subdivision are Jews who are regular rent payers and respecters of authority but dirty, messy and great cheats

The Japs and Chinamen are as a rule quiet and easy to deal with. Of the two the Japs are the noisiest. The Chinaman is tame and quiet

The difficulties of gathering so much information meant there was little time to stop, observe or talk to members of these communities. Unfortunately, the ideas that underpinned much of the educated and even scientific discourse of the time meant that shortcuts in understanding could be taken with confidence.

Jews rarely get drunk. In 10 years he has only known two cases - both of women charged for being drunk and disorderly. Jew women as a rule lead happier lives than Gentile women

The group is known as the "Fenian Barracks". The streets have all the appearances of semi vicious poverty. Hatless women, uncleaned doorsteps, two or 3 women drunk, shoeless and stocking less children