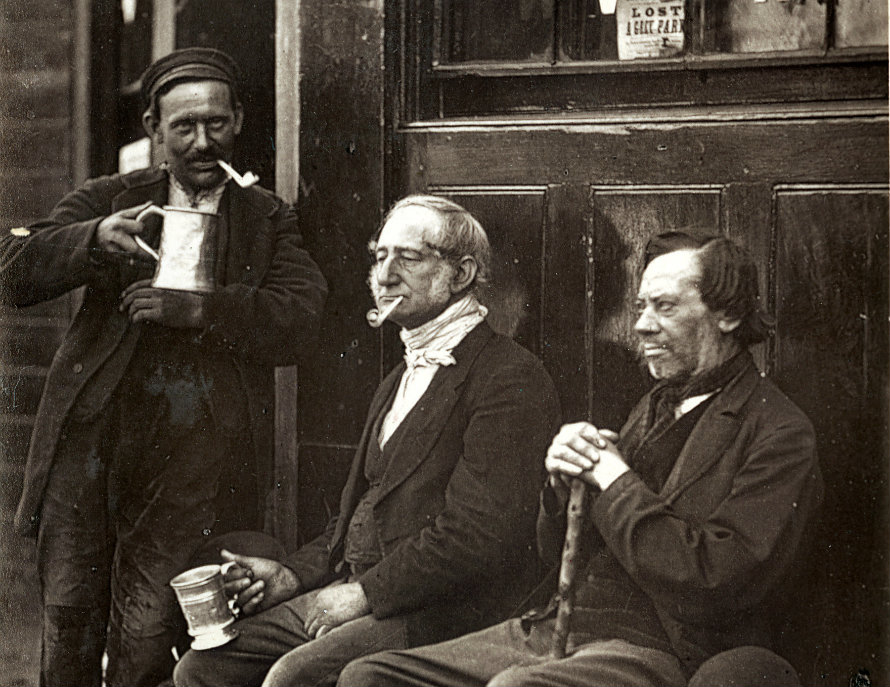 Men outside a shop drinking and smoking (from Street Life in London, 1877)

Stories and accounts of drinking and drug taking have yet to lose their ability to shock, concern and entertain us. The police notebooks help to illustrate the habits and attitudes surrounding both vices in Victorian London.

Drinking was certainly more noticed and referenced and, in particular, women's alcohol consumption or their presence in pubs was often commented upon. More broadly, drinking and it's relation to the perception of someone's character was another repeated refrain. Opium dens were also reported in the police notebooks with particular attention paid to the physical layout of the spaces and the accompanying paraphernalia. The racial and ethnic background of those present in the dens is also referenced.

[...] the trousers which he wore hung loosely round his hips & legs showing the outlines of his bones & joints which had evidently not been born to wear trousers. The man was an Indian, a Hindoo, & the woman English or perhaps Irish. They were man & wife & kept an opium den.

As we entered they were just going to start smoking. Two pipes were reached down from racks on the wall.

Drugs and the Victorians

The expansionist nature of Victorian Britain's industries and Empire meant that people and substances were rapidly put into new contexts in which interactions were made possible that had rarely been before. Drugs such as cocaine, laudanum, cannabis and opium were easily obtained, with many people using them as part of medicinal treatments and tinctures. Other deadly poisons such as strychnine, arsenic and cyanide could also be found hidden away inside animal poisons and other over-the-counter recipes and products. Not only were potentially lethal drugs to be found inside everyday items, but opium vendors included stationers, tobacconists and even barbers.

The availability of opium especially was tied to the East India Company's growth and cultivation of the drug in India, from where it was smuggled into China via private sellers. The profits which flowed back meant the sale of the drug made much commercial sense for the East India Company but also led to the very real problem of addiction and drug dependency in China, where the drug was made illegal. Two armed conflicts were fought between the Chinese and the British, now known as the Opium Wars, for control and dominance over the trade.

Given the majority of world production of opium took place in India, it is no surprise that the drug found its way back to London, the Heart of the Empire, where many immigrant communities settled. The notebook description of the Chinese man as a "pig-tailed heathen" expressed the relatively popular perspective of the moral and racial inferiority of such "alien" practices.

Some of the concerns around the convenience of access to drugs such as opium, strychnine, arsenic and chloroform were laid to rest with the passing of the 1868 Pharmacy Act. The act only allowed experienced or licensed pharmacists, chemists and "druggists" to sell such materials. However, as can be seen from the police notebooks, usage of such substances clearly continued in spite of the new legislation. Drink, however, remained the preferred form of intoxicant for the majority of people.

Concerns about both alcohol and drugs were very visible during the nineteenth century with various charitable organisations set up to combat their influence and apparent vice-like grip over the poor. Organised societies such as the British Women's Temperance Association and the Society for the Suppression of the Opium Trade were formed and had connections to Quakerism.

Certainly a missionary zeal seemed to inspire the temperance pioneers in the UK. John Dunlop was a central figure in the early temperance movement in Scotland, where he co-founded the Glasgow and West of Scotland Temperance Society. Dunlop also wrote a book called The philosophy of artificial and compulsory drinking usage in Great Britain and Ireland (1839), in which he "detailed the drinking usages of thirty nine different professions" as well as the "occasions on which the rules of a society ... demand the introduction and use of intoxicating liquor" (p. xi). These rules set out punishments for those who did not pay into a drink kitty. For example, if an English tailor refused to pay they would have "aimed a blow at the social indulgences of all the tailors in the Queen's dominions. It is therefore obligatory on every man to resent this as an injury done to his individual self. No maltreatment is too severe for such a case." (p. 198). The book is a fascinating insight into the role of drink in Britain in the early-Victorian era, even in working life. However, Dunlop's view of alcohol as an evil that needed to be eradicated makes it perhaps a somewhat partial account.

Much is written about drinking in the final published Inquiry, reflecting its central status in cultural life. Booth's summary of the situation in Volume 17 is interesting in that it makes clear that while the rate of drinking had increased this had not necessarily come at the expense of public decency:

There is, as regards these habits, a consensus of opinion which to my mind carries conviction, that while there is more drinking there is less drunkenness than formerly, and that the increase in drinking is to be laid mainly to the account of the female sex. This latter phase seems to be one of the unexpected results of the emancipation of women.

A great ticking of clocks, there were 7 hanging all round the room so that the men may see when to get back to their ships. A very happy jolly looking Chinaman - looked like a Jap - on the bed, face wreathed in smiles who had smoked

But the young girl of 16 or 17, who has just left school and is at work in a small household as general servant gets chaffed when she goes to fetch the beer, makes undesirable acquaintance & often it is the first step in her ruin.

They are a rough lot all Abbotts men. "One day at work & two days drink is about their character."

Flanagan has not remarked that men engaged in the boot & shoe trade drink more than others (Fitzgerald says they do) but he has noticed that women drink more than they used.

Women are never allowed in the mens compartments not even wives of customers.