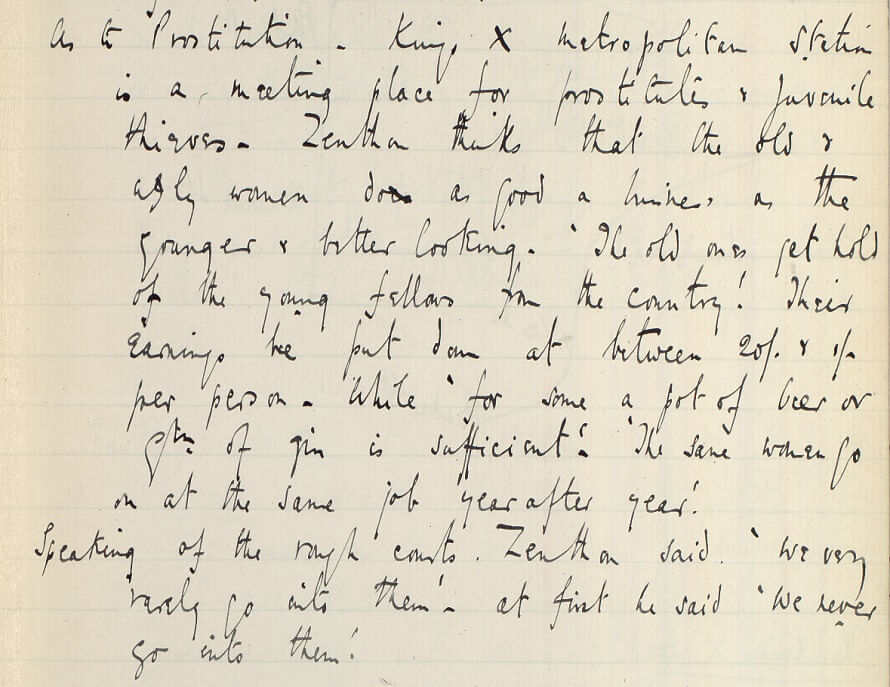 The police notebooks contain a number of references to prostitution in different parts of London. Though the notebooks were written at different times and with different police officers, there are commonly recurring themes. Examples include the nationality of both the women and their pimps, and the costs and charges made by all of those involved, including the rents of the lodging houses from which the prostitutes worked.

There are also the personal observations of the officers eager to offer their opinions about the work and what they saw.

As to prostitution. King's X Metropolitan station is a meeting place for prostitutes and juvenile thieves. Zenthon thinks that the old & ugly woman does as good a business as the younger & better looking.

Concerns about prostitution had led to it being legislated against for both moralistic and public health reasons. The Contagious Diseases Acts which were passed between 1864-1869 had made prostitutes solely to blame for the spread of venereal diseases. The efforts of Josephine Butler and others led to the acts being repealed in 1886.

William T. Stead's scathing series of articles in the Pall Mall Gazette called The Maiden Tribute of Modern Babylon, provided a shocking analysis of the situation faced by many young women who worked as prostitutes. The articles were published in July 1885 and the descriptions of underage girls being forced into prostitution outraged the public.

The law and criminalisation

The Criminal Law Amendment Act, which was passed in August 1885, sought to redress some of the issues raised by the Stead's articles. The act raised the age of consent to 16 (from 13), had clauses preventing girls and women from being abducted for prostitution, and made the running of brothels punishable by fines and imprisonment.

Infamously, this law was also responsible for the punishment of sex acts between men. Oscar Wilde and Alan Turing were both charged under Section 11 of the act, which decreed that "any male person who, in public or private, commits [...] any act of gross indecency with an other male person, shall be guilty of a misdemeanour". The act was partly repealed in 1967 thanks to the passing of the Sex Offences Act, which decriminalised homosexuality.

Booth, to his chagrin, found that many of those working as prostitutes did not necessarily share the wider public sense of shame and immorality:

The plain and simple truth is, that for the most part, they have no desire at all to be rescued. Perhaps the most painful part of the whole work lies in the fact that so many of these women do not, and will not, regard prostitution as a sin. As one sits down and enters into general conversation with these girls, nicely and neatly dressed, well-behaved, and sometimes even with serious thoughts as to the results of the life they lead, it seems incredible that they can be content to go on persistently in the same course.

A very large number of prostitutes - English, French, German & Belgian. They run up the rents. For foreign prostitutes the bully is of distinct use. He poses as their husband when they look for lodgings.

They are Irish cockneys, their bullies are equally in men's lodging houses. The charges of such prostitutes are 1/- or 6d sometimes.

Prostitutes are of all nations - French, English, Belgian and German in particular. "You rarely find an Italian or a Jewess." "Ponces" or bullies are also of all nations and a large number of them are English.