Who was Charles Booth? 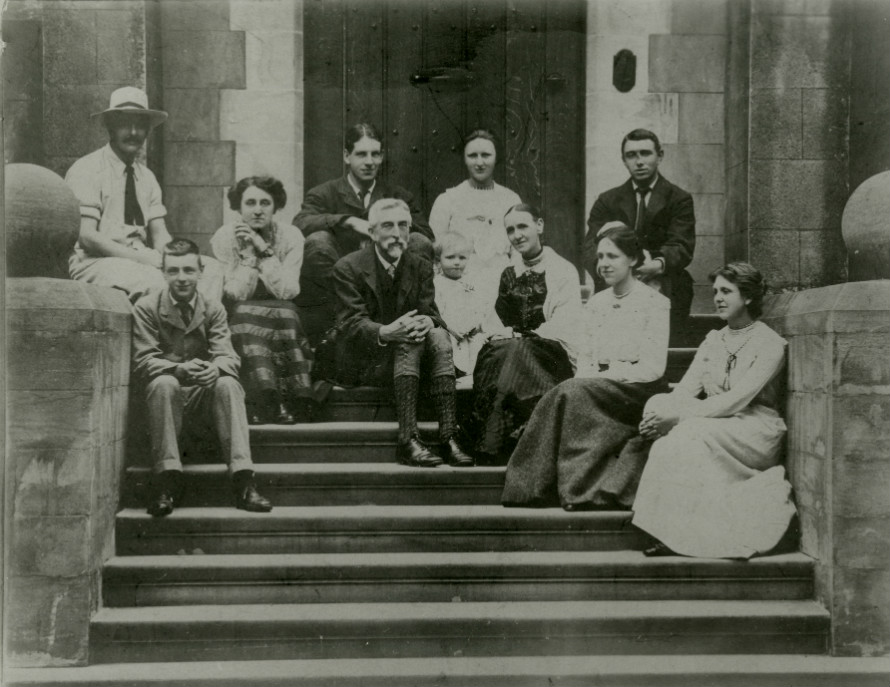 Charles Booth with members of his family on the steps of Gracedieu Manor, 1902

Charles Booth was one of those remarkable English Victorians who can justly be described as one of the great and the good. Profoundly concerned by contemporary social problems, and not a pious nor even a religious man, he recognised the limitations of philanthropy and conditional charity in addressing the poverty which scarred British society. Without any commission other than his own he devised, organised, and funded one of the most comprehensive and scientific social surveys of London life that had then been undertaken. Booth also added his voice to the cause of state old age pensions as a practical instrument of social policy to alleviate destitution in old age, established as one of the commonest causes of pauperism. Simultaneously he was a successful businessman, running international interests in the leather industry and a steam shipping line.

Charles Booth was born in Liverpool on 30 March 1840, the son of Charles Booth and Emily Fletcher. His father was a corn merchant, and both father and mother were committed Unitarians. Charles attended the Royal Institution School in Liverpool until becoming apprenticed to Lamport and Holt's shipping company at the age of sixteen.

In 1862, by now an orphan and grieving the recent and sudden death of Antonia Prange, the woman he loved, Charles joined his eldest brother Alfred in the commission business dealing principally in skins and leather. Using money inherited from their father, the brothers set up offices in both Liverpool and New York. The energy and enthusiasm which Charles brought to the business quickly led him to become the leading and active figure in the partnership, although the name of the firm remained as Alfred Booth and Company. It was during these years that he developed the foundations of his business methods, reflections of which could be observed in his approach to social investigation.

Booth's success as a businessman can be attributed to many things: his good fortune in inheriting £20,000 capital; the support of his family and the culture of business in which he grew up; his energy, enthusiasm, courage and hard work; his assiduous gathering of facts and figures, and ability to interpret this data; and perhaps also his essential decency and integrity in his business dealings. His letters - as well as describing the timeless business problems of such things as personnel management, factory relocation and decision making - give some indication of his fundamental business ethic. Whilst by no means averse to the spirit of competition - he was intensely absorbed by the battle between the Booth shipping line and its rival R. Singlehurst and Company - he was not aggressive in his business affairs. Describing what must have been at the least an irritating incident, in a letter to his wife in 1895 he expresses patience and good temper:

Kattner has very cleverly turned the tables on us by getting the buyer of some goods for which we thought too little had been taken to offer to cancel the sale! What to do rests with the owner of the goods, but I advise climbing down good humouredly. It has been an excellent object lesson.

The value of Booth's correspondence, a substantial collection of which is held at the Senate House Library, was recognised by his wife:

Some day, perhaps a hundred years hence, they may yield a rich harvest to some student of the future, telling of the ways in which a Captain of Industry in the days of the great Queen did his work, before State Control, and possibly International State Management, revolutionise the conduct of Industry.

Political and social interests: Liverpool in the 1860s

Business was not Booth's only occupation at this time. He was an active participant in extended family life and local politics. Siblings and cousins debated issues of the day, such as the extension of the franchise, the works of Charles Darwin and the doctrine of positivism. A record of some of their preoccupations can be found in The Colony, a handwritten family magazine circulated in seven volumes between 1866 and 1871. Booth campaigned unsuccessfully for the Liberal parliamentary candidate in the election of 1865. House to house canvassing in the slums of Toxteth was a shocking exposition of squalor and poverty, which must have contributed to his gradual abandonment of religious faith. But Booth developed a profound sense of obligation and responsibility towards the poor and to the improvement of social conditions. His disillusionment with party politics following further victories for the Tory "beerocracy" in municipal elections in 1866 was such that he rejected this as a means by which he could influence society, but suggested to him the benefits of educating the electorate. To this end he joined Joseph Chamberlain's Birmingham Education League. A survey - which may well bear his hallmark - was undertaken which estimated that 25,000 Liverpool children were neither at school nor at work. Booth's further disillusionment with conventional politics and religion was ensured by the Education Act of 1870 which sidestepped the cause of secular education.

On 29 April 1871 Booth married Mary Macaulay, daughter of Charles Zachary Macaulay and Mary Potter, and niece of the historian Thomas Babington Macaulay. Mary was well-educated, intelligent, and a friend of the extended Booth and Holt families. She had quite a different sensibility to the Liverpool set however and on visiting Liverpool found the good works of the ladies no substitute for the metropolitan literary and political jousting to which she was accustomed. Mary became to Booth an invaluable adviser in the business, an active contributor to the work of his monumental survey into London life and labour, as well as running a substantial household and raising six children.

Life in London, punctuated for Charles by frequent business trips both to Liverpool and the United States, was busy and sociable. The Booths' circle included such notable figures as Mary's cousin Beatrice Potter (later Beatrice Webb), Octavia Hill of the Charity Organisation Society, and Canon Samuel Barnett. In this milieu the social problems of the day were readily discussed. The unprecedented scale of the problem of poverty in the rapidly growing Victorian cities was often sensationally reported in the contemporary press, and must have provoked a degree of fear among their readers. In order to combat the conjecture, prejudice and potential social unrest, Booth recognised the importance of a true description in facts and figures of the social landscape.

In 1884 he undertook to assist in the allocation of the Lord Mayor of London's Relief Fund, by analysing census returns. From this he discovered the highly unsatisfactory nature of the censuses, and would later become a member of the official committee in charge of the 1891 census and make a number of recommendations for its improvement. In the autumn of 1885 Henry Hyndman published the results of an inquiry into poverty conducted by the Social Democratic Federation, which claimed to show that up to twenty-five percent of the population of London lived in extreme poverty. In early 1886 Booth visited Hyndman, who records in his autobiography that Booth told him that "in his opinion we had grossly overstated the case" and that he would himself be undertaking an inquiry into the condition of workers in London. The first meeting to organise this inquiry was held on 17 April 1886: the work would last until 1903, resulting in the publication of three editions of the survey, the final edition of Life and Labour of the People in London (London: Macmillan, 1902-1903) running to 17 volumes. The work would absorb both Charles and Mary Booth and employ a team of social investigators including, at various times, Beatrice Webb, Arthur Baxter, Clara Collet, David Schloss, George Duckworth, Hubert Llewllyn Smith, Jesse Argyle, and Ernest Aves.

The survey into London life and labour

The inquiry was organised into three broad sections: poverty, industry and religious influences. The poverty series gathered information from the School Board Visitors about the levels of poverty and types of occupation among the families for which they were responsible. Special studies into subjects such as the trades associated with poverty, housing, population movements, the Jewish community and education were also included. The industry series, working as a complement to the information already gathered about occupations from the School Board visitors, investigated every conceivable trade in London, from cricketers to wigmakers, to establish wage levels and conditions of employment. The series also covered the "unoccupied classes" and inmates of institutions, thereby including some fascinating material on the workhouses and causes of pauperism. The religious influences series - perhaps better described as social or moral influences - sought to describe these other forces acting on the lives of the people. As well as religion and philanthropy, it also covered local government and policing.

One of the most striking products of the inquiry were the maps of London, coloured street by street to indicate the levels of poverty and wealth. The first of these series was produced based on the information gathered from the School Board visitors representing the situation in 1889 and was widely circulated and commented upon. Ten years later, as the inquiry was still progressing, it was thought necessary to revisit the maps and a second series was produced, the Maps Descriptive of London Poverty 1898-99. These were based on the observations made by investigators accompanying policemen on their beats around London.

It must have been with a sense of relief that the final concluding volume was published in 1903. Writing in 1894 to Alfred Marshall about the publication of one of the earlier volumes, Booth reveals some of the frustrations of authorship: "Never I should think has a book been the occasion of so much bad language on the part of its author - I cursed every minute I gave to it." (Senate House Library MS797/I/1352). Working without a thesis to prove or disprove and with such an infinity of potential subject matter to describe, it might have been difficult to know when to stop. In his introduction to the first volume of the religious influences series, Booth makes a wry reference to the internal momentum of the inquiry: "I have at times doubted whether the prolongation of this work has had any other basis than an inability on my part to come to a conclusion."

Booth's work on the inquiry confirmed his place in British life. Although he resisted all attempts to become involved in party politics, where his views now lay largely with the Conservative Party, he nevertheless served in many capacities in public life. In 1893 he served on the Royal Commission on the Aged Poor: the commissioners were divided and Booth signed the minority report in 1895. In 1904 Booth was made a Privy Councillor and in 1907 he served with Beatrice Webb on the Royal Commission on the Poor Law. This commission was also racked by dissent and Booth signed neither of the resulting reports. In 1908, many years after he first began writing and speaking about the need for state pensions to alleviate poverty amongst the elderly, the Liberal government passed the Old Age Pensions Act in 1908. Although Booth had argued for a universal old age pension rather than the means tested system which the act introduced, he was recognised by many as one of the progenitors of the pension. Over the years he was made a fellow of the Royal Society and awarded honorary degrees by the Universities of Cambridge, Liverpool and Oxford.

Early in 1912 Booth handed over the chairmanship of Alfred Booth and Company to his nephew, but in 1915 returned willingly to work under wartime exigencies despite growing evidence of heart disease. On 23 November 1916 he died following a stroke. He was at his country home of Gracedieu in Thringstone, Leicestershire, with which he and Mary had fallen in love in 1886 and which had over the years hosted numerous gatherings of children, grandchildren, friends and family. He is buried in Thringstone Churchyard. Mary remained at Gracedieu until her death on 25 September 1939.