The Booth archive at LSE Library 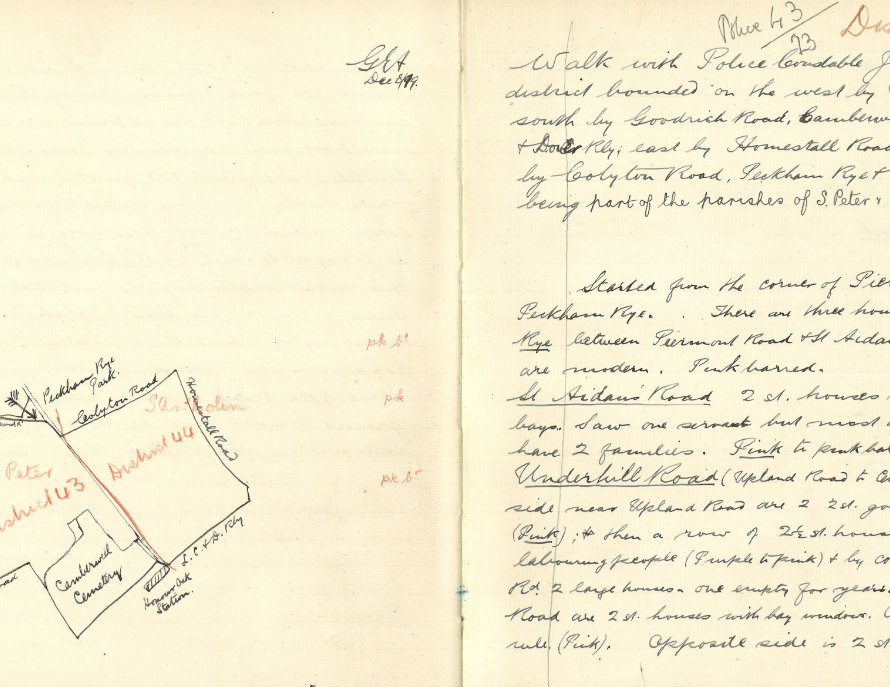 The archive of Charles Booth's inquiry is held by LSE Library, and can be accessed in the Library's reading room. Thematically, the archive falls into three main series - poverty, industry and religious influences - reflecting the structure of the published survey of Life and Labour of the People in London. The digitised material made available on this website includes the police notebooks and Jewish notebooks (both part of the religious influences series) and the Stepney Union casebooks (part of the industry series).

The industry series details patterns of work, wage levels and conditions of employment in every conceivable trade in London, from cricketers to wigmakers. The data comes in two main forms. Firstly, reports of over 1,000 interviews with named business owners, workers, managers and trade union officials, and secondly, over 1,000 questionnaires completed by firms, family businesses and trade unions.

Booth’s industry investigation also covered the "unoccupied classes" and inmates of institutions, and the industry notebooks contain a series of detailed case histories for Bromley and Stepney workhouse inmates and recipients of outdoor relief from the Stepney Union.

The religious influences series and the police notebooks

The religious influences series documents social and moral forces acting on the lives of the people of London. As well as religion and philanthropy, it covers education, health, housing, local government, family life, crime and policing. The survey notebooks contain over 1500 interviews with ministers of all denominations: Church of England, Methodist, Presbyterian, Jewish and Roman Catholic ministers were consulted as well as Salvation Army officers and missionaries. The reports of the interviews include details about church activities and remarks on local government, policing, drink, prostitution, crime, marriage, thrift, health, housing and social conditions. The reports often include a description of the physical characteristics and manner of the interviewee, and are accompanied by examples of parish magazines and other printed material produced by religious organisations. This series also includes over 200 questionnaires completed by both Church of England and nonconformist officials, giving information about their activities and the communities they served.

The religious influences series also includes a series of police notebooks, containing reports of over 300 walks undertaken by social investigators accompanying police officers around their beats. The reports of the walks record vivid descriptions of the streets of London, their inhabitants and often a description of the policemen. The report of each walk is accompanied by a sketch map of the area covered in the walk. A typical description indicates the type of housing, state of the roads, inhabitants if seen, their activities and type of occupations and the extent of poverty. Sometimes the descriptions go beyond this and include observations on the relationship of publicans and police, crime and drunkenness among men, women and children, and descriptions of ethnic communities.

Physical arrangement of the archive

In terms of physical format, the archive consists primarily of bound volumes, stored flat in boxes. The first series consists of the original bound notebooks used by Booth’s investigators (some specially printed in tabular form for the Inquiry), containing quantitative information gathered by Booth’s research team; others come with standard lined pages, containing reports of interviews and other qualitative information. The second series of volumes contains questionnaires and other loose papers which were bound into volumes following their transfer to LSE Library in 1948.

The archive is arranged in the following six sections:

The full Booth archive catalogue includes detailed descriptions of the contents of each volume.