What was the Inquiry? 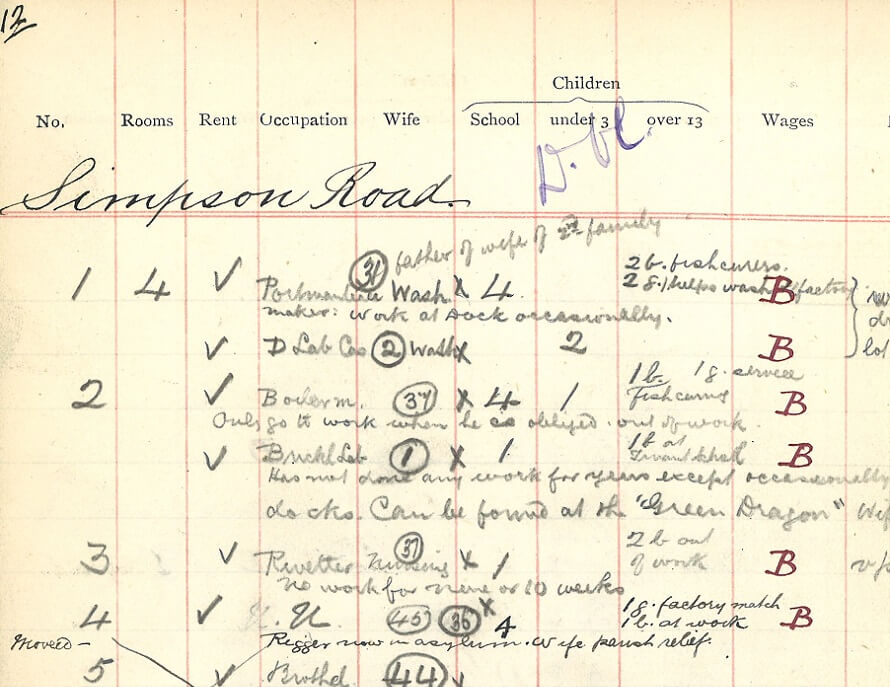 A notebook with data about the residences of Simpson Road

Charles Booth's Inquiry into the Life and Labour of the People in London, undertaken between 1886 and 1903, was one of several surveys of working class life carried out in the 19th century. It is the only survey for which the original notes and data have survived and therefore provides a unique insight into the development of the philosophy and methodology of social investigation in the United Kingdom.

You can view a useful graphical guide to how the various parts of the survey connect to one another. This image is courtesy of Thames & Hudson and is reproduced from their Charles Booth’s London Poverty Maps (2019).

Many of the volumes from the different editions have been digitised and are available to view via the Internet Archive.

The survey notes and data form a rich and varied resource for investigation into the social and economic history of late 19th century London. Living and working conditions, the lives and employment of women, organisation of trade and industry, the effects of national and international migration, leisure activities, and the religious life of the capital are all described in detail. The Charles Booth archive held by LSE Library contains over 450 original notebooks from the survey.

The survey methodology was complex and original, as befitted such an ambitious exercise of empirical research. Booth attempted to understand the lives of Londoners through a tripartite investigation of their places of work and working conditions, their homes and the urban environments in which they lived, and through the religious life of the city. Investigators interviewed London School Board visitors, and accompanied policemen on their beats. They interviewed factory owners, workers and trade union representatives at their places of work or in their homes. They visited ministers of religion and their congregations. The notebooks record the comments of interviewees and investigators and gathered data which was then used to generate statistical evidence of the living and working conditions of Londoners.

Booth drew heavily on the resources of Toynbee Hall, a university settlement based in the East End. Many of his assistants were associated with Toynbee Hall, and many went on to become distinguished figures in public life. They included Jesse Argyle, George Arkell, Ernest Aves, Clara Collet, George Duckworth, Beatrice Potter (later Beatrice Webb, wife of Sidney Webb), David Schloss, and Hubert Llewellyn Smith. Smith went on to direct the New Survey of London (1928-1933) to update the work of the Booth survey.

One of the most well-known achievements of Charles Booth's Inquiry into the Life and Labour of the People in London was the Maps Descriptive of London Poverty in which the levels of poverty and wealth found by the survey investigators was mapped out street by street. Read more about the maps in the following section.